Well, just like many other hunters this early archery season i was unable to score my big buck “Widey” we had been watching for 2 months.

I had a few opertunities to harvest smallers bucks two of which would have made pope and young but i had my heart set on “Widey”.

My gut feeling was the presence of a full moon and really hot days cuased the deer to move more at dark and off peak hours. My trail cameras confimred my assumption he was coming through at night. 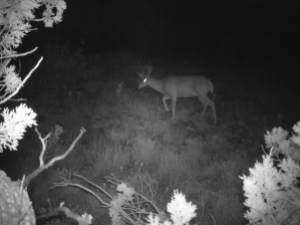 It was very fustrating because he had been coming every other day religiously for two months between 5:30am -7:30am or 6pm-7pm and never once did i have a pic of him at night. And now those five days I was there I had him come through 3 nights out of the 5.

I started to think maybe I was busting him out of his bed in the mornings when i was entering my blind at 3:30am and considered changing tactics and hunting 8am-2pm I have had success on midwest bucks this way durring full moons. But i talked myself out of it and stuck to my game plan, i pulled out after 5 days and decide to try my luck on muleys and came up short as well only finding small forkeys and imature bucks. Oh well theres allway late season.